Again, RCP chooses to select among two numbers provided by the poll and chooses the one more favorable to Obama.  RCP is reporting Obama leading 50-47, but that number is only acheived by allocating the undecided voters 50/50.  This is not a very good approach, since undecideds at this point are likely to either support Romney or not vote.  It is another example of RCP cherry picking to show a result more favorable to Obama.

Putting these results through the models, we get the following:

Even with the partisan split, this poll is still showing a shift toward Obama of about 1.5 points.  Having said that, consider the following table included in their release: 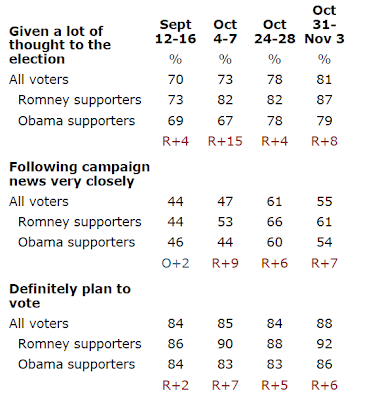 Notice that the enthusiasm number for Republicans has increased since the last poll and they maintain a significant advantage over the Democrats.  This leads to the conclusion that a D+4 turnout is very unlikely to occur, and that the Even or better turnout I expect is more likely.

So why is this poll so skewed?  The obvious answer can be found in the following table:

The like voter screen is way to loose, and is certainly driven by the fact that 34% stated they have already voted.  The total of early votes nationwide is barely over 20%.  Whatever the reason, the likely voter screen indicates that we will have an 85.9% participation rate.  Here are the participation rates of all Presidential elections going back to 1988:

Clearly, Pew has too many Likely Voters in their screen.  About 27.7% too many.  History has shown that Likely Voters trend toward Republicans more than Registered Voters.

In the end, this is Pew's final opinion on this race.

However, based on the evidence within their poll, I believe this poll properly points to a Romney victory.