If you haven't noticed my irritation with RCP and poll reporting, the lead numbers above should give you a clue.  The top line numbers are reported as "Obama +1" then you read into the article and find out that

As I did with the Battleground poll, I am changing their method of sample determination.  They use a metric of "leaning" Independents, which obviates the concept of partisan turnout.  The last time I looked at this poll the D/R/I was 44/38/18 or D+6.  The following is their sample data:

When we adjust this result to the different models, we get the following results:

This represents about a 1 point shift toward Obama since the last time the poll was run, but Romney retains a comfortable lead in all possible turnout scenarios.

Going through the crosstabs, one omission stands out when looking at specific issues of importance to the electorate: 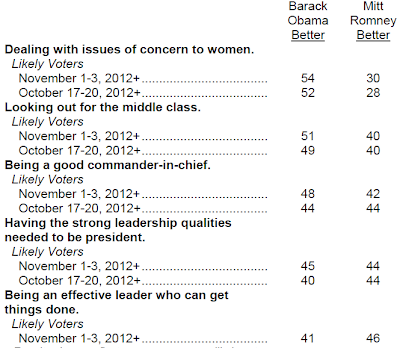 The voters are not asked who would be better dealing with the economy or jobs.  These two issues are 3 times more important to the voters than all other issues, when asked in other polls.  The fact that the pollster doesn't even ask is telling.

In summary, this poll does not attempt to predict who will win the race.  Leaving the result at 47.5-47.5.  However, using the models, it is predicting the following results: