Let's start with the top line number.  The last time this poll was run, one week ago before Sandy, Obama was ahead 49-48.  So this poll has moved 2 in Romney's direction, so much for that Sandy bump.  Now if you look on RCP and the Politico article, you see this listed as tied.  However, look at the following from inside the poll: 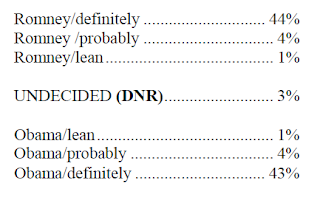 Next I want to look at the partisan sample.  This has been a particular problem with this poll, since they push people to identify as partisan due to their "leaning".  They then provide a preference of the very few remaining Independents.  Here is the results of this poll:

In the past I have used the numbers as is, and used the models to reweight.  However, since they have forced Independents into this artificial construct this time, I am putting them back where they belong and using the "lean" to determine Independent preference.  The D/R/I for this poll is really 36/31/30, with Independents favoring Romney by 2 points.  It is a D+5 poll.


Putting these results through the models, we get the following:


In sum, this data indicates this election continues to remain very close on the surface, but the political environment and the composition of the likely electorate strongly favor Governor Romney. These factors come into play with our “vote election model” – which takes into account variables like vote intensity, voters who say they are definite in their vote, and demographics like age and education. In that snapshot of today’s vote model, Mitt Romney has majority support (51%). This is an election that will be decided by voters’ focus on the economy, and by turnout and intensity – as we enter the last 72 hours of the campaign, both of those factors favor Mitt Romney.

Now before you think I am just cherry picking the Republican version, let's also look at the Lake analysis:


In the final days of the campaign, a majority of voters expects and awaits the President’s second term—a metric that has historically had a better record of predicting Presidential electoral outcomes. Cementing voters’ expectations of an Obama victory requires that the President and his Party drive Democratic turnout and maintain their edge among independents. Obama and Democrats have already managed to lock in more support than their Republican counterparts among those who have already voted and have critical advantages on which to build to help propel turnout. Sustaining Democrats’ early vote leads will necessitate they maintain, if not redouble, the strength of their ground game in these final days, particularly in battleground states that remain divided in their support for Obama and Romney.


"a majority of voters expects and awaits the President’s second term—a metric that has historically had a better record of predicting Presidential electoral outcomes." - What does this even mean?  That because people expect Obama to win, he likely will win?  Why do we bother with elections then?

"President and his Party drive Democratic turnout and maintain their edge among independents." - Didn't the poll already show that Independents favor Romney?  And what about the increased enthusiasm that is visible to us all and mentioned by Terrance Group?

"Democrats have already managed to lock in more support than their Republican counterparts among those who have already voted" - Other polls show this to not be true, and actual votes submitted so far shows the Democrats far behind their goals.

"necessitate they maintain, if not redouble, the strength of their ground game in these final days" - This seems to indicate that the current efforts are insufficient to achieve victory.

To sum up, the Republican pollster from this partnership is offering a specific prediction of Romney's final vote results.  The Democrat is offering platitudes and advice, without making a prediction of Obama winning.

The Battleground final poll predicts Romney will win 51-48.
Posted by Unknown at 8:34 PM